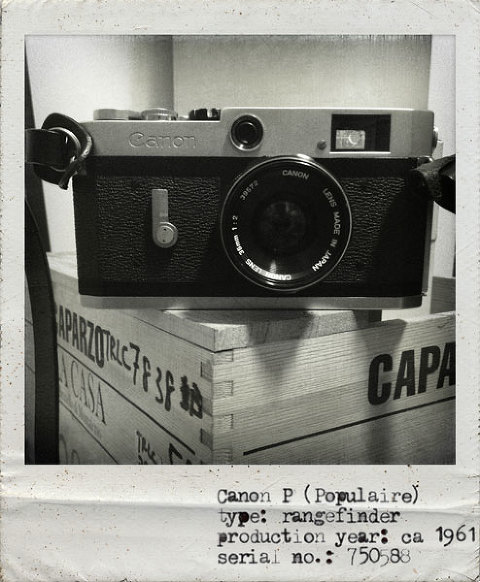 For the past three years, I have found myself drawn to old cameras. There is something about them that is timeless. Maybe the style, the shape or the sound of the shutter curtain. Or maybe it’s just me who is bored of the current modern styles and just want to go back to basics.

Though not a lot, I have started collecting some old camera. Working and not working. One of them that I really like is the Canon P, a rangefinder camera that Canon first released in 1959 and continued until 1961. Mine was a ‘late’ model. Upon researching, based on the serial number, I believe mine was manufactured in mid to late 1961.

The camera is a solid and pure mechanical machine. It does not have battery and it uses film! In this current fast moving world, sometimes it’s good to slow down, enjoy the moment and just shoot a roll of 36 exposures.

So, if you have any old cameras that your grandparents or parents owned, try to clean them up, buy a roll of film and have fun shooting with it. But if you are really thinking of getting rid of them, email me first.   🙂

And, here are some of the photos I took using this camera:

That’s all for now. I am heading to eBay to check on some nice 1960s cameras on auction or sale before going to bed. Have a great week ahead, guys. Keep shooting.